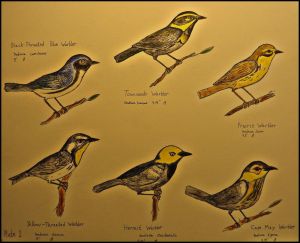 I started this blog in November. My first post was the image of the 1st plate of warblers here. I descided after finishing that first plate I would do more, and after pouring over bird guides I narrowed it down to 30 warblers total. Believe me there are more, but I didn’t want to burn myself out drawing so many similar sized birds, nor did I wish to burn out the viewer .

I chose the birds based on name and coloration, then broke them into groups of six, as thats what fits best on the 16×20 cold press board that I use. Many of the proper field guide books break them into groups of like-colors. Which makes sense when you’re trying to identify a bird in the field.  I descided against that as I found it more visually striking to have a variety of colored birds on each page instead of all very similar colors and field identification aid isn’t my goal with this project. That goal instead being to illustrate the beauty of the natural world around us.

I couldn’t resist putting Nashville, Grace’s, and Tennessee togther on the same row.  Something about the poetry I’ve spoke of before.

The Cerulean Warbler was one of my favorites, its not often I get a chance to use so much blue…except for scrub jays, Stellers jays, blue jays, and all three varieties of bluebirds…ok I guess there’s a few.