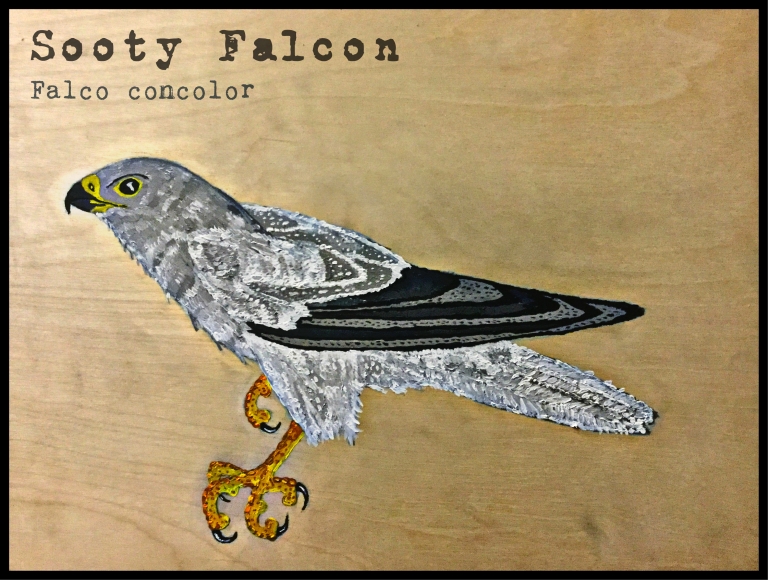 This medium sized falcon is found from Northeastern Africa to the Southern Persian Gulf.
It belongs to the Hobby group, sometimes considered a subgenus, Hypotriorchis.
Which is a small group of similar falcons. The Sooty falcon is often confused with the Eleonora’s Falcon. Both are similar in color but vary in build. The Sooty falcon has a shorter tail and is suited to high speed pursuits. 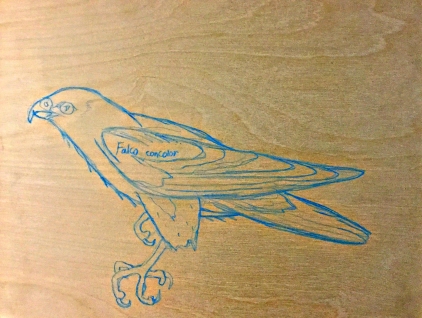 It eats primarily migrating birds. Striking them to the ground and severing the spinal cord with a bite to the back of the head. Sooty Falcons will also take dragon flies, grabbing them with their talons then passing them to their beak, eating on the wing.
They nest on rocky ledges in scattered areas of the Libyan desert and adjacent parts of Egypt. Laying up to four eggs. Long distance migrators, they winter in Eastern Africa as far south as Madagascar.

I really enjoyed this painting. It was a refreshing new challenge. Working with whites and yellows. Learning about shadows and finding their colors.
This painting was another good one for learning what I need to tackle the Snowy Owl.
A challenge I have been putting off until I can see it in my head right. This falcon helped me find that. But before we go that far North, I’m jumping over the Atlantic to look at the Orange-Breasted Falcon in Central and South America.
Thanks a bunch for looking at birds with me.