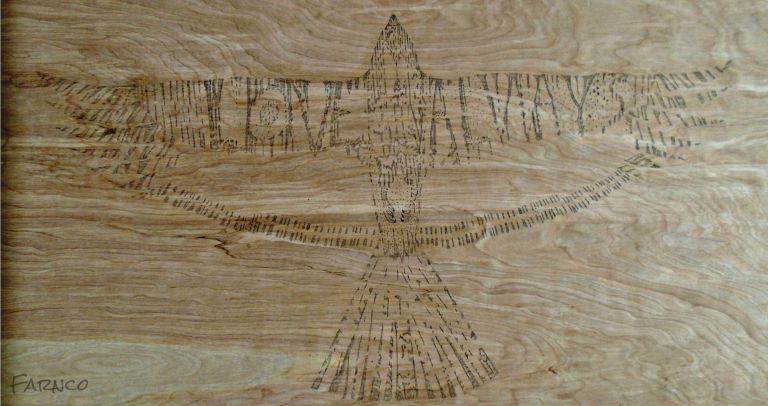 In July I had completed my first large (2’x4′) hawk drawing on plywood when it occurred to me, I could put words into the wings. The question I had was, what words?
It seemed Two words would be the best place to start. A word for each wing. Ok that was easy enough, but which two words?
So I thought it over for a few months. It got pushed to the back burner for a while.
Other interesting projects came and went across my drawing desk.
A recent voyage across the United States, took me from California, to Denver, to the prairies of northern Illinois.
I met my newborn Nephew, and forged many great new connections. I also connected with the roots from which I grew.
I was standing on the East bank of the Fox River, when the proper two words found me.
I didn’t bother to write them down, Instead with my mind I put them in my back pocket. Because I knew since they had arisen, they would never leave, or fall out of my pocket.
So I took the two words home with me back to California, where I put them into a hawks wings and let it go back into the world.
Thank you for the opportunity to share this with you. It absolutely means the world to me.
Widgets