We’ve looked at this bird more than any other here. This species has been the epicenter of my fascination with raptors for years. My goal with this panel was to illustrate the variety of plumages found in this species across North America. I’ve read this described as races or subspecies. I’m not sure what the right word is but it really is noteworthy how different the Western Red-tailed Hawk (bottom center) is in colors from a light-morph Krider’s Red-tailed Hawk (top right).

Here’s a look at the painting process for fun. Thanks for looking at birds with me. 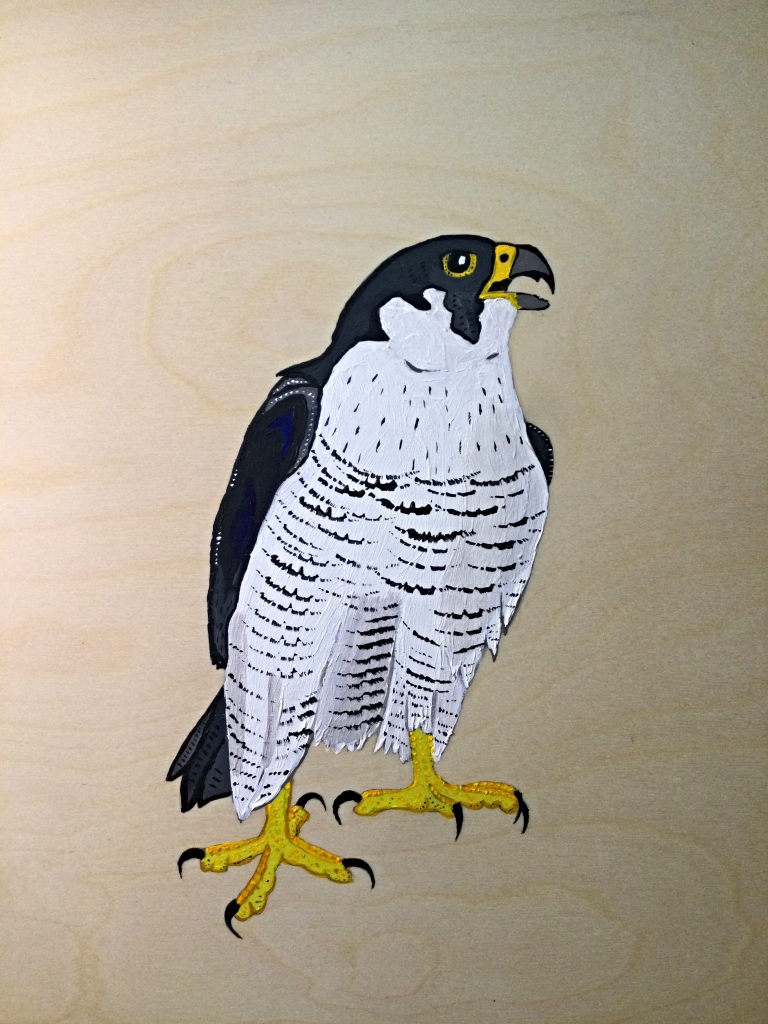 We’ve looked at this falcon several times here. From its astounding 200+ mph dives to its serrated knife of a bill that it utilizes to sever the spines of its prey. This bird is in a league of its own.

After the last panel painting I still had these speedy murder birds fresh in mind so I put together another panel.  Thanks for looking at birds with me again.

The first Peregrine I saw was with my dad when he visited me in Morro Bay, Ca. at “the rock”.  It was perched way up there and we checked it out via binoculars. The next peregrine I saw was while standing in the middle of a busy intersection in Oakland, Ca. Somebody yelled “Get outa the street asshole!” And all I could do was point at the cloud of pigeon feathers created by a falcon hitting prey at 200+ mph. Then a couple weeks later while at work at Facebook HQ in Menlo Park, Ca. while drinking a beer with my coworker Brian (we were off the clock) one flew by and I lost my mind with excitement. It was like seeing a celebrity.

In late 2016 I planned to move back to Illinois. It became clear to me I needed to be closer to my family and those that I loved. A concern I had was that I’d see fewer of the birds I’d fallen so hard for and dedicated so much of my time to illustrate and learn about.

After four days on the road driving across half of North America and counting every hawk I saw (27) I pulled into my parents driveway. My dad (whom had driven all the way to California to help me move home) and I hugged in the drive way in celebration. This was the same place where we stood when I left for California almost 10 years prior. It was dusk and I walked out into the field next to the house and heard clearly the distinct call of a great horned owl. I knew then I was home and my raptor adventures had only just begun.

Leaving California was a big change in many ways. But then there I was this February in Chicago, the city by the lake, watching two peregrines hunting shorebirds.  It was like watching cheetahs on the discovery channel hunt gazelle.

I’d been wanting to revisit this painting and pose for a while and finally got back to it on a wood panel my Dad made for me. Here we are almost exactly 5 years since I first put it on page (wooden page) in Oakland.

We’re back again coming in to land on an outstretched hand.

I’m so grateful for my family for all they have done to push me to learn, love, and grow. I’m also grateful for you for looking at birds with me. Thank you so much.

This one’s for you Dad! 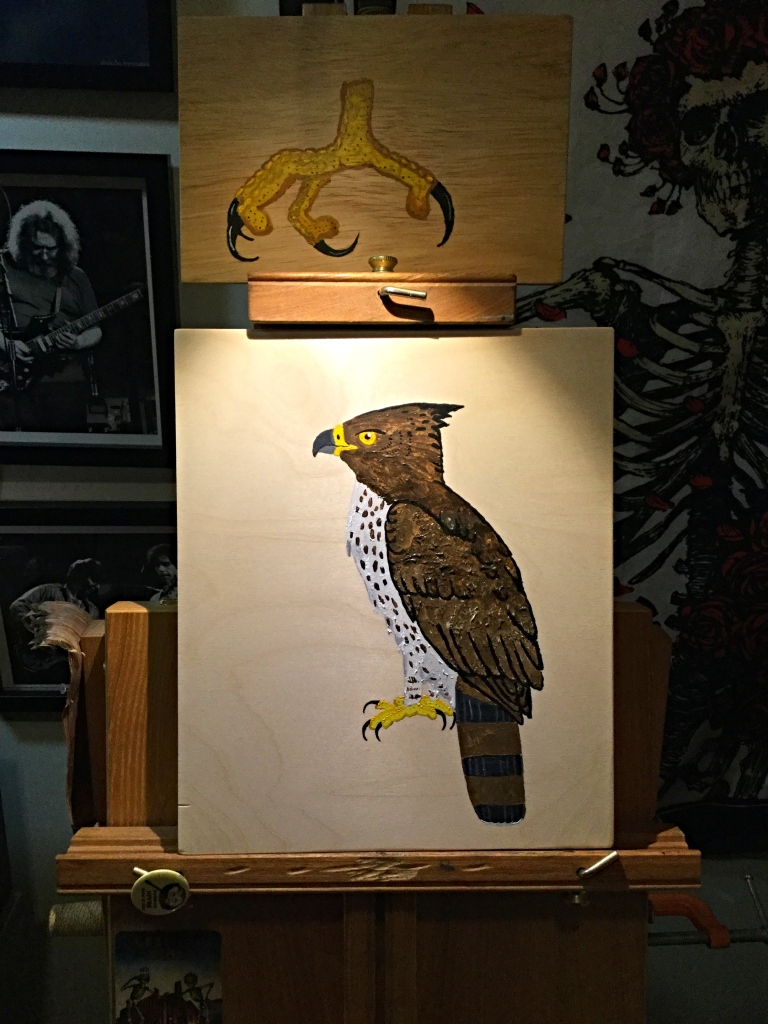 A large and powerful eagle found in forested regions of Central and Southeastern Africa. Feeds primarily on mammals including monkeys, forest antelope, hyraxes, mongooses, and bushbabies. Large lizards and snakes are also on the menu, as is the occasional bird.

Thanks so much for looking at birds with me.

I have already painted one of these for you. A wonderful specimen sits in the Field Museum of Natural History in Chicago. Just a few miles south of my drawing desk. I’ve photographed it countless times to aid in paintings like this. 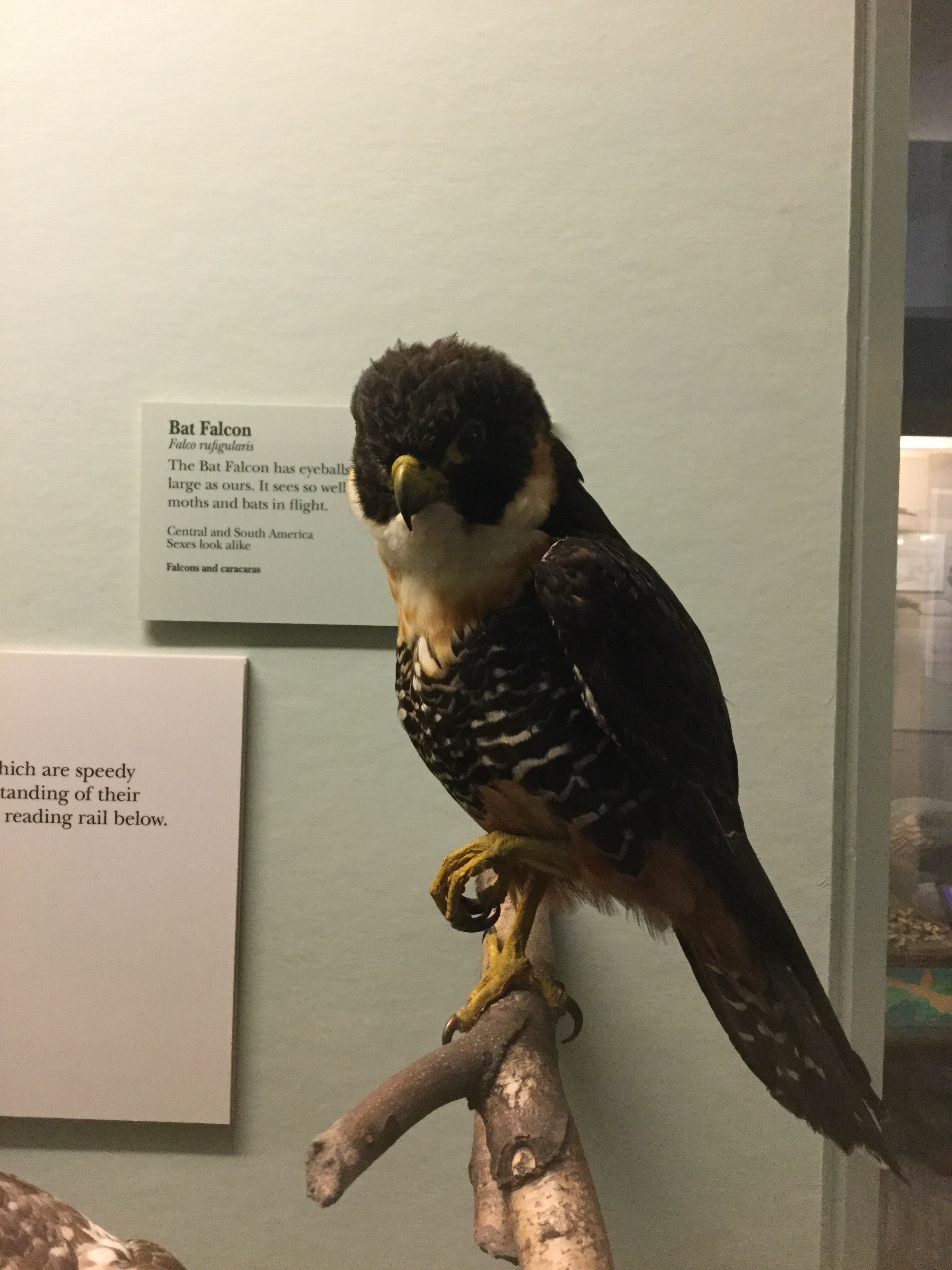 I send you my best.

Thanks so much for looking at birds with me.

A medium size eagle found in tropical forests of Central and South America.  Aptly named for its unique coloration and head crest of black feathers.

Prefers to hunt from a perch or high glide in thick tropical forests. The dinner menu for Spizaetus ornatus is a variety of small mammals, birds, and reptiles. 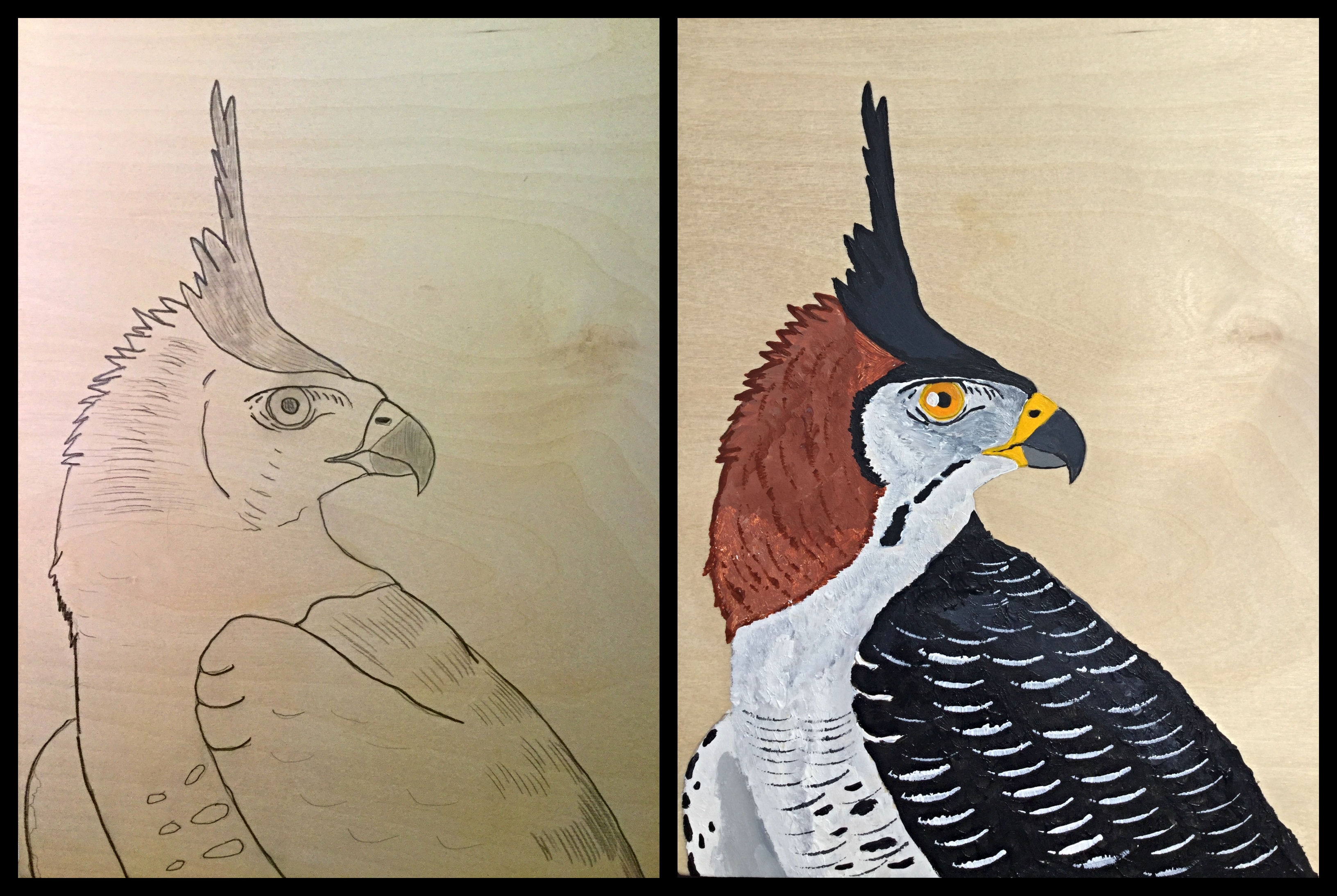 My favorite raptor of South America (There’s some solid competition there too).  I’ve made a few paintings of this one before but until now I feel I hadn’t captured its nuances. Then again having never been on the same continent as one, it’s hard to say. Thank you so much for looking at birds with me.

North America’s most widespread raptor. Found in open regions of Mexico all the way north to Alaska and just about every point between. They prefer grasslands, fields, deserts, roadsides, parks, farmland, and broken forests. They feed primarily on small mammals, birds, reptiles, and swarming insects. They hunt from a perch like utility poles and trees. They also hunt on the wing, soaring in circles, gliding on thermals.  These hawks mate for life, nesting in treetops, cliff sides, and man made structures. They lay a clutch of between 1 and 5 eggs. Incubation time varies from 28-35 days.

It’s no secret this is my favorite bird to study. In the field or in the studio they never fail to capture my imagination. They embody a sense of exploration and beauty to me. They were a common sight in my 20s when I was exploring California by bicycle and have remained a common sight as I enjoy my home near the prairie remnants of Illinois.

I put together these two paintings over the last couple weeks on panels my father made for me in his workshop. I can’t begin to express what a great gift it is to be able to paint on a panel he made, and to have his generous support all my life.

I’m so glad I get to share these birds and art with you all, thank you so much for looking at birds with me. 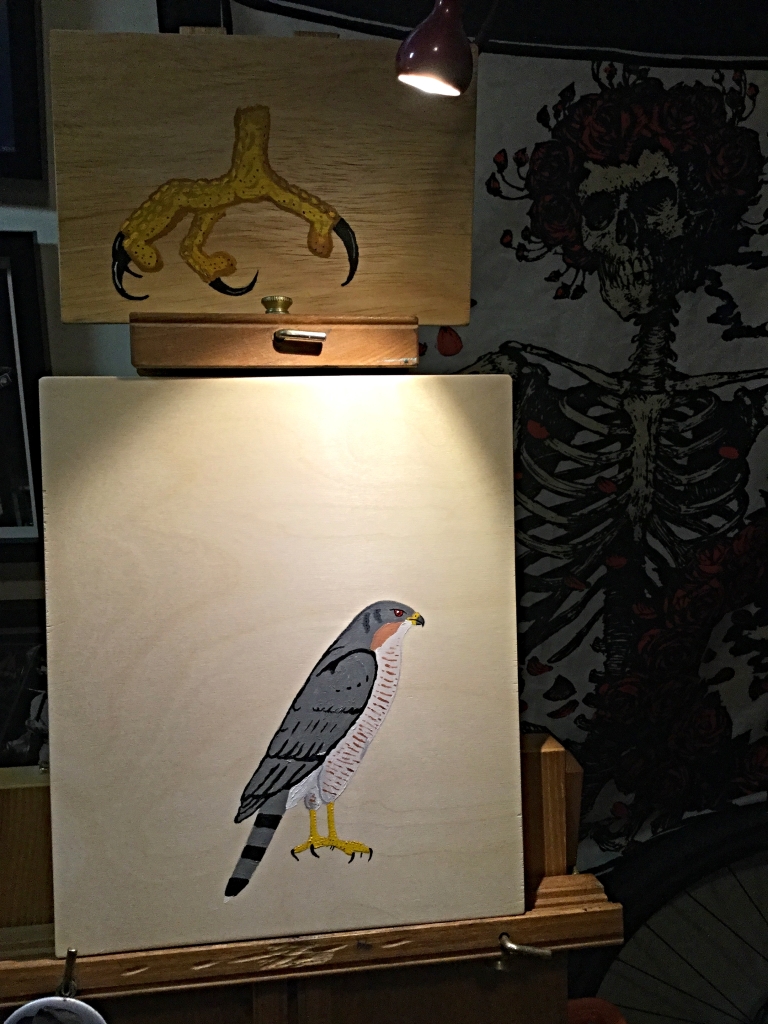 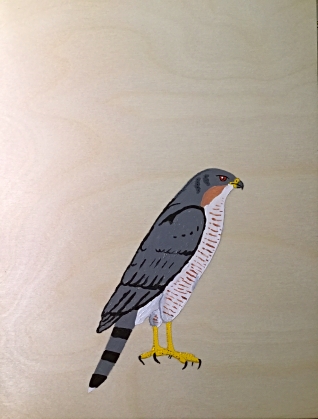 Until this week this is a hawk that hasn’t been very well represented in my collection of panel paintings. I enjoyed making the first panel so much I made a second one the next day.

One of Africa’s largest and strongest raptors. Feeding on a variety of mammals, reptiles, and birds. Known to  take prey as large as forest antelope, monkeys, and hyraxes. Reptiles taken range from monitor lizards to various species of snakes.

Typically hunts from a perch, dropping down onto prey that it then dispatches with its large talons. Also known to knock prey from trees or cliffs, letting gravity do the deed.  These mighty eagles are found in forested areas of Central and Southeast Africa. 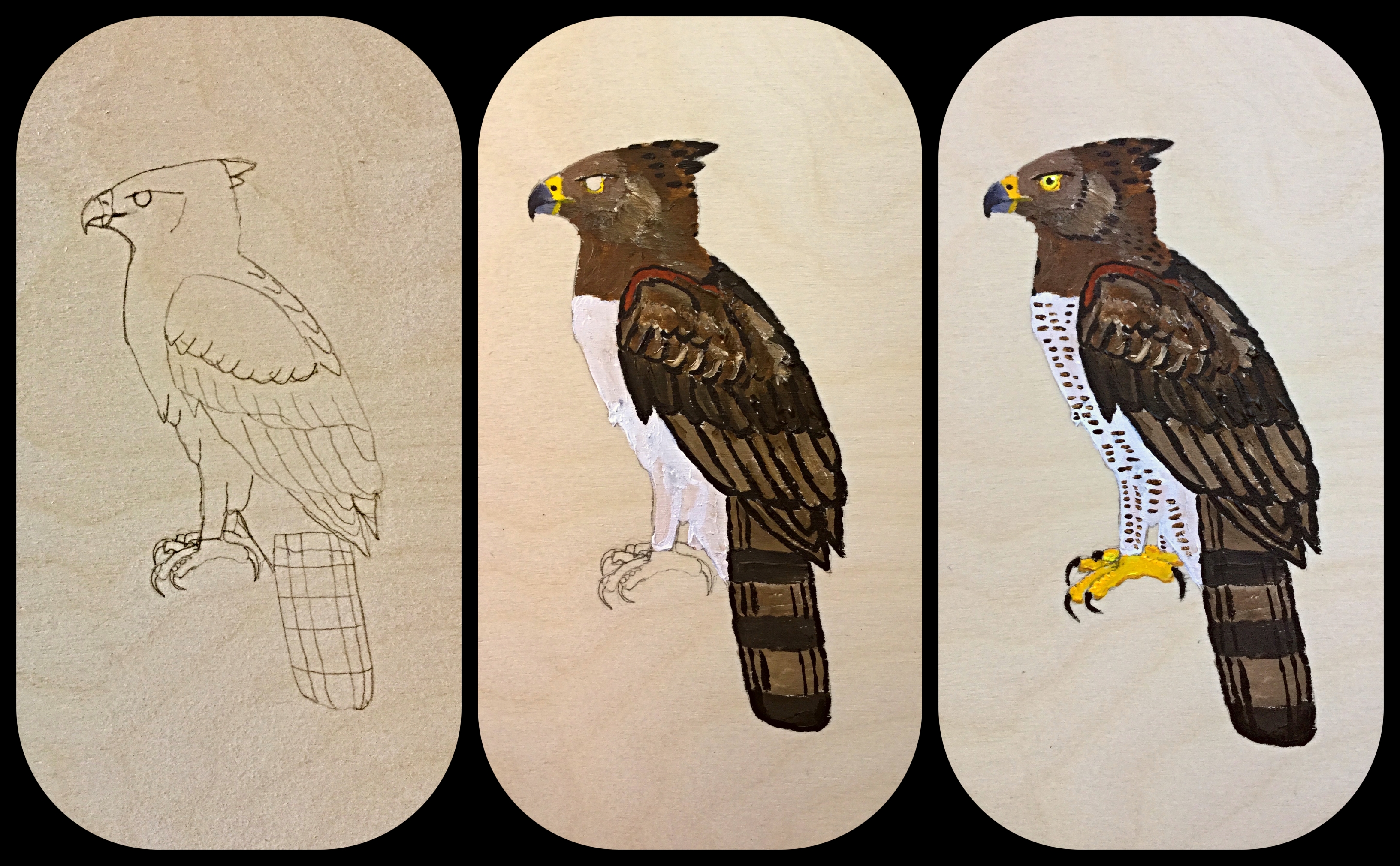 This is a smaller panel than I usually make, and made for a nice afternoon activity. Taking me three hours instead of the three weeks like most larger panels take me.

Thanks so much for looking at birds with me. Stay well, and I send you all my best from me and my family to you and yours.

Here’s an aptly named raptor found in the tropical forests of Central and South America. Feeds primarily on mammals, birds, large lizards, and snakes. They often hunt still from a perch then dive down after prey that’s passing by. They are also very strong flyers that can chase down prey that’s escaping.